VANCOUVER—Takashi Murakami: The Octopus Eats Its Own Leg is a major retrospective of Takashi Murakami’s paintings, presenting more than fifty works spanning three decades of the artist’s career. The first survey of Murakami’s work to be shown in Canada, this exhibition showcases the artist’s paintings from his earliest mature work to his recent large-scale projects, including a newly created five-metre-tall sculpture and three multi-panel paintings created specially for the Vancouver Art Gallery exhibition. This critical survey reveals the consistent themes and profound engagement with history that have guided Murakami’s practice. The paintings and sculptures in this exhibition highlight a dedication to craftsmanship and a boundless imagination moving freely within an ever-expanding field of aesthetic decisions and cultural inspirations, from Buddhist folk traditions to art history to popular culture.

Murakami’s paintings from the early 1980s synthesize traditional painting techniques and formats with contemporary subject matter. Trained in the Nihonga style of Japanese painting, which uses mineral pigments for vivid colours and meticulous craftsmanship, Murakami melded traditional materials and aesthetics with contemporary subjects including the dangers of nuclear power and global consumerism.

Murakami’s negotiation of traditional and contemporary aesthetics in both Japanese and American culture moved into new territory in the late 1990s with the development of his distinctive “Superflat” concept. Both a style and an ethos, Superflat addresses the cultural attributes of post-World War II Japan, in particular the popular image of Japan as a producer of saccharine consumer products such as Hello Kitty. Within a Superflat world, the otaku—an obsessive manga, anime or tech geek—becomes a driver of contemporary culture. These theories significantly influenced Murakami’s output from this period, which employed highly refined classical Japanese painting techniques to depict a supercharged mix of Pop, anime and manga content within a flattened representational picture plane. 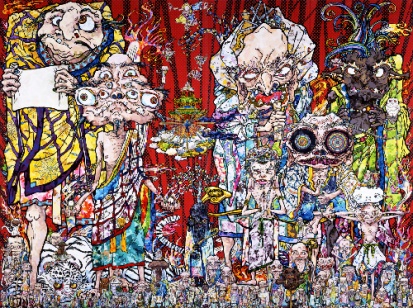 This distinctive style has yielded some of Murakami’s most popular and recognizable forms, including Mr. DOB, a mouse-like character that serves as part ambassador, part self-portrait. Mr. DOB has paved the way for other characters throughout the artist’s career, with a palette of signature motifs—anime eyes, jagged teeth, rounded letterforms. Demonstrating the fluidity of his Superflat concept, these figures become visual skins that spread over and occupy any imaginable surface, from paintings, sculptures and wallpaper to plush toys, stickers and other consumer products. Furthermore, Murakami considers his collaborations as “disruptions” to the expectations of a highly stratified art world system that prizes exclusivity and elitism.

After locating himself at the centre of luxury and celebrity cultures, Murakami began to depart from the commercial, cartoon-inspired aesthetic that garnered him popular acclaim. Deeply affected by the massive earthquake and tsunami in 2011 that killed more than 15,000 people in Japan, the artist returned to his training in the classics to find an appropriate response. His research into Buddhist iconography lead to his monumental representation of the Arhats (Buddhist monks) who roamed the land in an attempt to console and enlighten others. This fuelled an ongoing body of paintings depicting an eccentric and highly individualized group of Arhats with elements of both historical and contemporary Japanese and Buddhist culture.